RTI Not just an end, but a means to many ends”---RAIC Boss 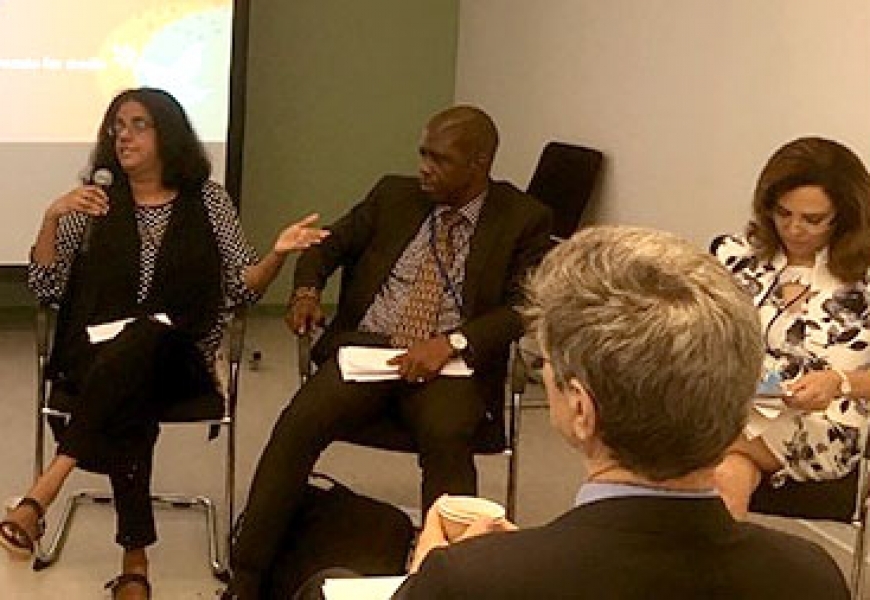 The RAIC boss was speaking at the launch event of UNESCO’s new report on access to information on Wednesday 17th July 2019 in New York, within the context of the UN’s High Level Political Forum (HLPF) reviewing SDG progress.

The SDG review at the UN includes assessing performance on Goal 16 on peace, justice and strong institutions, which includes SDG target 16.10 on achieving “public access to information and fundamental freedoms”.

Dr Shaw, who was speaking as one of the three Information Commissioners invited by UNESCO to serve as respondents to the discussion on ‘Why access to information is crucial to achieving SDG 16 and how monitoring systems contribute to it? ‘, compared the sustainable development goals to human rights in terms of being universal, indivisible, interdependent, and interrelated, He said his commission has used the human rights approach to sell the right to access information in Sierra Leone by calling on the public and public institutions to see its relevance beyond the context of the First Generation Civil and Political Rights, but also within the context of the Second Generation Economic, Social and Cultural Rights.

“Right to Public Access to Information, which is captured in SDG 16.10.2 is important not only as an instrument, or tool, in achieving the other sub goals of SDG 16 such as access to justice for all, but also in achieving all the other SDGs such as no poverty, zero hunger, health for all, access to education etc.”, said Dr Shaw.

The RAIC Information Commissioner gave the example of a market woman who can only ask questions about lack of social amenities such as market toilets and sanitation if she has access to information about funding their parliamentarians or local authorities receive on their behalf from government. He also said that progress on the free quality primary and secondary school education cannot be adequately monitored if schools fail to proactively disclose information so that parents can access the information they need to ask the right questions about any possible gaps in the quality, or quantity, of education that is provided.

Responding to the question of monitoring and reporting on the implementation of the right to access information law in Sierra Leone, Dr Shaw, who has a background in journalism and academia, said this is done annually by looking at the number of Freedom of Information (FOI) requests received and processed by all MDAs as well as those brought to the attention of his commission as complaints for lack of compliance. He also said compliance to the Proactive Disclosure of Information (PDI), which is one of its flagship projects, is also monitored by looking at the number of MDAs that have submitted their PDI Publication Schemes to the RAIC for approval. He reported that following two deadlines, 12 MDAs, including the Police and Statistics Sierra Leone, have so far submitted their PDI Publication scheme.

Sri Lanka’s Information Commissioner, Kishali Pinto-Jayawardena said there was a huge change between the pre- and post- RTI periods in her country in regard to citizens’ expectations about openness, transparency and accountability. She cited an example of a woman’s use of the law to regain ownership of land that had been improperly confiscated.

From Mexico’s National Institute for Transparency, Access to Information and the Protection of Personal Data (INAI), Blanca Ibarra elaborated that the independence of such entities was also being pursued by encouraging information openness at local levels. INAI had played a significant role in developing public interest rules for the classification of government records in and creating a digital platform, she stated.

Speaking for civil society, Maarten Visser of the Dutch NGO Free Press Unlimited explained how his organization, the Global Forum for Media Development and Deutsche Welle Akademie had partnered with UNESCO to ensure successful data collection for the new report.

“We also worked in five countries to encourage inclusion of SDG 16.10.2 in the Voluntary National Review reports being tabled this week,” he said.

Opening the event, which was hosted by the mission of the Kingdom of the Netherlands, was the country’s Deputy Minister for Development Co-operation, Brigitte Tazelaar. “Access to information is not guaranteed by freedom of information laws,” she cautioned, adding that there needed to be implementation as well as practical and technical access for the public.

Delivering the keynote address, Professor Jeffrey Sachs, Special Advisor on the Sustainable Development Goals (SDGs) to the UN Secretary General, and professor of sustainable development at the University of Columbia, New York, said societies need to make the right to information real, and to protect its champions.

“SDG 16.10 is fundamental to the SDGs as it is about accountability, and about an honest assessment of how many people are living in poverty and attending school, of rates of deforestation, and about the state of the rule of law, criminality and justice”, said Sachs.

Although disclosure of certain information was not always popular with governments, the SDGs need “systematic global evidence and data on where RTI laws are working, and where they are not working,” he affirmed.

Meanwhile, UNESCO has released its new report on the state of guarantees of access to information, and international progress on their implementation, assessed these issues in terms of Sustainable Development Goal (SDG) 16 Indicator 10.2.
Launched during the 2019 UN High-Level Political Forum (HLPF) on Sustainable Development on 17 July 2019 in New York, the report covers 43* developing countries engaged in this year’s Voluntary National Reviews (VNRs) at the UN.
The document presents key findings and recommendations stemming from UNESCO’s global data exercise conducted earlier this year in collaboration with UNESCO Institute for Statistics (UIS) and the Centre for Law and Democracy (CLD).

“This exercise generated a wealth of information about both the data collection process and the state of implementation of right to information (RTI) laws. The findings can therefore serve as a good baseline for tracking future developments,” said Guy Berger, UNESCO’s Director for Freedom of Expression and Media Development

According to the report, RTI oversight bodies are present in the 126 countries with RTI laws which are covered in the report. The majority of these bodies have binding decision-making powers to enforce information disclosure where it is justified.
Most appeals filed to these bodies are reportedly resolved, and in reasonable time. Meanwhile, roughly 2 in 3 states have transparent annual reports and also carry out awareness-raising efforts. However, the report suggests that both oversight bodies and individual public authorities could do better in terms of implementing right to information laws.

“One of the key recommendations is that governments should connect these oversight bodies such as Information Commissions and the central SDG monitoring bodies at the national level. This will help ensure the sustainability of the whole monitoring and reporting process for this SDG target,” said Berger.

Closing remarks came from Marie Ottosson, deputy director of Sweden’s Sida. “We need informed and engaged people if we want to achieve the sustainable development agenda”, she argued, adding that a rights-based approach is essential.
Statistics about implementation could be complemented by thinking “upstream” about agenda-setting and promoting issue recognition, involvement of people in development, and in forecasting trends in access to information, said Ottosson.
As custodian agency for SDG Indicator 16.10.2, UNESCO leads the monitoring and reporting on access to information via its Communication and Information Sector’s International Programme for the Development of Communication (IPDC).

In her contribution as a guest of the event, Sierra Leone’s Deputy Ambassador for Political Affairs to the United Nations, HE Mrs.Victoria Suleimani, assured the meeting that her country is in principle fully in support of the bid championed by its information Commissioner for Sierra Leone to co-sponsor the UN resolution to make September 28 an international day for the Universal Right to Access Information. She said her mission has already started to engage other main stake holders in the government on this and that she is positive about the outcome.