The Right to Access Information Commission (RAIC) joined the international community and the Human Rights Commission of Sierra Leone to commemorate the 71st Anniversary of Human Rights Day. In commemorating this year’s Human Right Day, the RAIC, with support from the Open Society Initiative for West Africa (OSIWA) brought human rights organizations, MDAs, CSOs, media practitioners, local and development partners together in a one day Symposium and Awards Ceremony at the Atlantic Hotel, Lumley Beach, in the evening hours of Tuesday, 10th December, 2019.

The Right to Access Information Commission (RAIC) joined the international community and the Human Rights Commission of Sierra Leone to commemorate the 71st Anniversary of Human Rights Day. In commemorating this year’s Human Right Day, the RAIC, with support from the Open Society Initiative for West Africa (OSIWA) brought human rights organizations, MDAs, CSOs, media practitioners, local and development partners together in a one day Symposium and Awards Ceremony at the Atlantic Hotel, Lumley Beach, in the evening hours of Tuesday, 10th December, 2019.

The objective of the event was to discuss issues of human rights and access to information and create an opportunity for participants to shed lights on where Sierra Leoneans have been on human rights and where they are as a nation. Also, to reward individuals and institutions that have played immense role in promoting Access to Information. The localized theme of the event was: “Access to Information as a Vehicle to Enjoy Other Human Rights

Delivering the keynote address on behalf of the Minister of Information and Communications, Permanent Secretary of the Ministry, Augustine Sheku described Human Rights as indelible rights and innate potentials to every human being. He noted that, human rights issues are not a new phenomenon, rather, a consequence of the suppressions of humanity over a period of time. He reemphasized the revolting tendency inherent in human beings especially when they are subjected to repression. He acknowledged the advent of good governance which rekindles the dignity of mankind and creates the space for open society and equality. The era of good governance he said creates the environment for freedom of expression whereby the marginalized facets of society such as women, children, disable have their voices heard and plights addressed. One way a society can thrive he said is when the citizens of that society open their minds to new ideas. The Permanent Secretary thanked the RAIC for creating the nexus between human rights and access to information. The Theme he said was informative and interactive given that the gate way to the understanding of many human rights is when people are given the wider opportunity to access information which in turn, broadens their horizon on issues affecting humanity.

In his welcome remarks, Chairman and Information Commissioner of RAIC, Dr. Ibrahim Seaga Shaw set the context for which the event was held.  He started by giving a brief overview of Human Rights Day and evoked memories of the Universal Declaration of Human Rights in 1948 by the United Nations General Assembly which created the basis for the commemoration of Human Rights Day on the 10th December of every year. He spelt out the key reasons why the human rights day is celebrated every year. He referred to the instrumental role of access to information as not only an end in itself in the context of political right but also as a means to enjoying other rights, including economic, social and cultural rights, as the main reason behind the recognition of the human rights day by the commission.

Dr. Shaw pointed out that the enactment of the 2013 Right to Access Information (RAI) Act broadens the scope for citizens to understand their rights.  He touched on the critical importance of access to information (ATI) in people’s lives and its imperative contributions to make societies open. The RAIC Chairman laid emphasis on the increase acceptance of ATI at both national and international levels. He cited Article 19 of the Universal Declaration of Human Rights which states that, “everyone has the right to hold opinions and to seek, receive and impart information and ideas through any media regardless of frontiers.” He added that universal access to quality and reliable information plays a pivotal role in empowering citizens, facilitating fair debate and giving equal opportunities to all.   He furthered that human rights are at the heart of the Sustainable Development Goals (SDGs). As he put it, in the absence of human dignity, sustainable development cannot be driven. Domestically, he cited section 25 of the Constitution of Sierra Leone which guarantees freedom of expression. 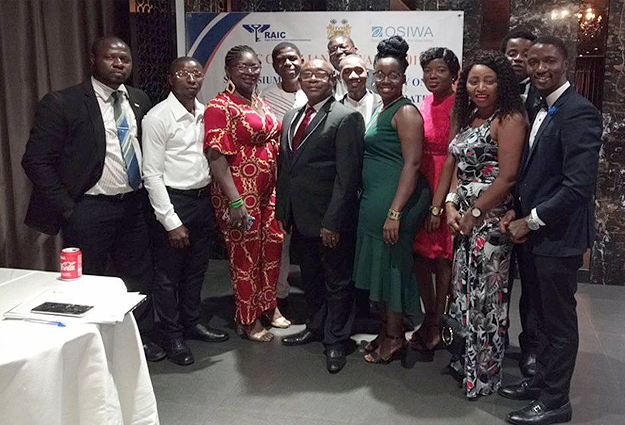 Executive Director of Campaign for Good Governance (CGG), Mercella Samba Sesay centered her message on ATI as a Conduit to Democratic Rights, Transformation and Responsibilities. She said there was struggle to the enactment of the RAI Law in Sierra Leone but there were attendant successes after the Act became a law. She said that the success of human rights in Sierra Leone depends largely on the promotion of ATI, adding, if ATI is to be perceived as a fundamental human right, the legal instruments that guarantee that right should be created. She expressed concern in respect of the existence of the 1965 Public Order Act which she said limits citizens’ freedom of expression and prevents the civil society and journalists from doing their work with liberty, hold leaders accountable and put democratic systems on track. Madam Samba Sesay drew an analogy between democracy and freedom of speech, expression and choice and stressed their inextricable relationship. “We cannot like democracy and hate freedom of expression,” she noted, maintaining that any system that silence democracy is impinging on human rights. She called on all and sundry to support the legal framework that promotes free speech. Democracy without right to information, she said, is meaningless. By her estimation, rights should go with responsibilities and that the rights of individuals need to be protected. She called for more public education regarding the RAI law; the building of the capacity of those requesting information and that of the Public Information Officer whose role is distinct from a Public Relations Officer, and the need for public institutions to have the tenacity to proactively disclose information.

In his delivery, Journalist and lecturer at FBC,, Dr. Isaac Massaquoi informed that democracy thrives on free media. Human rights issues he said are best addressed when the democratic institutions are functional. He noted that the media is one critical platform in which issues affecting the rights of the common man are addressed citing cases of illegal detentions and justice delay.  He was however concerned about the continuous erosion of the media by journalists as a result of financial dependency. The current phenomenon in the field of practice the media expert said, is attack collect and defend collect instead of addressing the very issues than govern the profession. This he went on creates a vacuum in the media. In Sierra Leone he said, a media driven by specialization is hardly come by.  In his view, there is no clearly specialized reporting; this he said is one of the reasons why local newspapers in Sierra Leone are hardly taken abroad for consumption. Dr. Massaquoi furthered that the fundamental role of journalists is to protect the rights of the people but believed even the few journalists that know about the RAI Act know little about some critical provisions therein especially the exemption provisions.  He called for more effort in the popularization of the RAI law as people can only understand and stand for their rights if they know the relevant laws.

Chief Executive Officer of Campaign for Human Rights and Development International (CHRDI), Abdul Fatoma built his message around the functionality of state institutions in Sierra Leone. He said the institutions the country relies on to promote issues of human rights are under resourced.  He was concerned that since the enactment of the RAI law a lot of institutions are struggling to create websites, libraries and other infrastructures that will create the enabling environment for research. He called for the setting up of proper safeguards for public institutions and the building of the capacities of these institutions on ATI and protected data.  As he put it, there should be data protection on internal security, foreign trade and diplomacy.  He maintained that in the interest of national security, not all information is freely accessible. Turning his discourse on human rights he said human rights should not be seen as a privilege but certain laws of the country such as the 1965 Public Order limit the rights of individuals. His standpoint was that if state institutions are properly resourced and allowed to function in line with the acts that created them, an information society is possible and the bulk of the population will definitely understand their human rights. 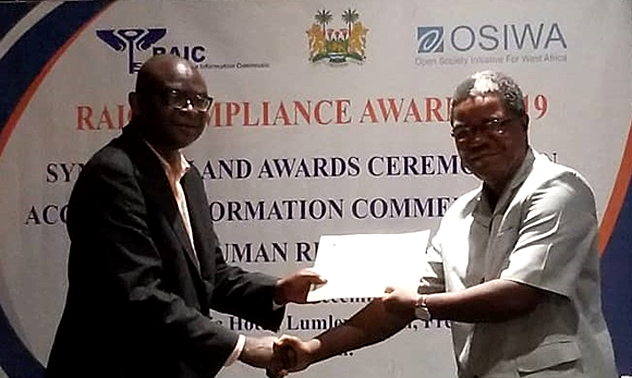 The Awards Ceremony was unfolded in the wake of the Symposium.  Having seen considerable progress in the implementation of the RAI law in Sierra Leone especially during the stewardship of the reconstituted Commission led by Dr. Shaw, the RAIC deemed it necessary to recognize individuals and institutions that contributed immensely in making the remarkable progress. Statistics Sierra Leone won the Gold trophy in the Proactive Publication Compliance Award-2019 for full and timely compliance; the Environment Protection Agency took the Silver for timely and near full compliance. In the Access to Information Compliance Award 2019, the Ministry of Foreign Affairs took the Gold for quickly responding to the FOI request without the intervention of the RAIC while the Sierra Leone Police took the Silver for timely and near full compliance. The Access to Information Advocates Award 2019 was given to two local civil society activists: Emanuel Saffa Abdulai and Charles Keff Kobai, and two international advocates: Maxwell Kidiri and Dr. Ololade Shyllon.

The Master of Ceremony of the Awards Night was David Patrick Kamara, PIO of RAIC. The Vote of Thanks was delivered by Hon. Mustapha Brima, Executive Secretary of RAIC.